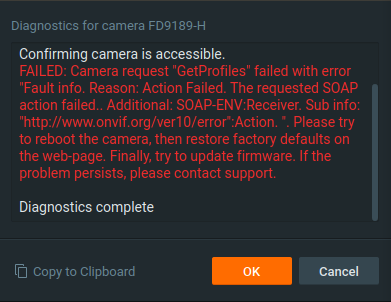 Cause of the Issue

This issue occurs due to difference between the implementation of the latest ONVIF API in DW Spectrum® v4.1 and some third-party cameras.

As a result, the cameras may display unexpected behavior during the initialization process when receiving onvif/media2 requests due to the different approaches implemented with the latest ONVIF API.  Because of this, the initialization of the affected models will be unsuccessful and cause the cameras to go offline.

Below you will find recommended troubleshooting steps for an offline camera.  You may need to physically bring the camera down from its installed location to bench test if you are unable to communicate with it over the network from a workstation.

If you are using a third-party IP camera that is showing as OFFLINE in DW Spectrum® IPVMS, please try the following:

Following Step 1 – Step 5, if you cannot ping or connect with the camera at all, you may be experiencing a network issue and should bench test the camera with a patch cable.

If Solution A did not fix the issues, but you can ping or connect with the camera on a local network, please try the following:

**NOTE:  To learn how to test ONVIF streams with ODM, consult the Testing the ONVIF Stream section of IP Camera Streaming Troubleshooting Guide.

If Solution B did not fix the issues and you can view the camera through ONVIF Device Manager, please try the following: