The VMAX® A1 allows users to monitor live camera video and to archive footage to a local storage drive.  This internally installed hard drive permits users to store and review previously recorded footage, regardless of Internet connection status.

In the event of an issue, the recording unit can be troubleshot to resolve most recording problems. However, in the rare event of a hard drive failure, the internal storage drive may need to be replaced.

DISCLAIMER:  If you are opening a VMAX® A1 Plus unit to replace a pre-installed HDD, the warranty for the unit will become voided.  Digital Watchdog will not be liable for the loss of data or consequential damages (including without limitation, damage to recording media) resulting from this process.

Prior to replacing the hard drive, make sure that you will be using an approved hard drive model as the replacement.

To replace the hard drive, follow the steps below:

There should be no LED lights illuminated on the front panel of the DVR.  If there is still power, soft-shutdown or disconnect the power cable from the DVR.

**Note:  For a soft-shutdown, if you are currently logged in at the DVR, click on the power icon on the toolbar at the bottom of the Live View screen, then select Shutdown.

Remove the hard drive from its mounting bracket. 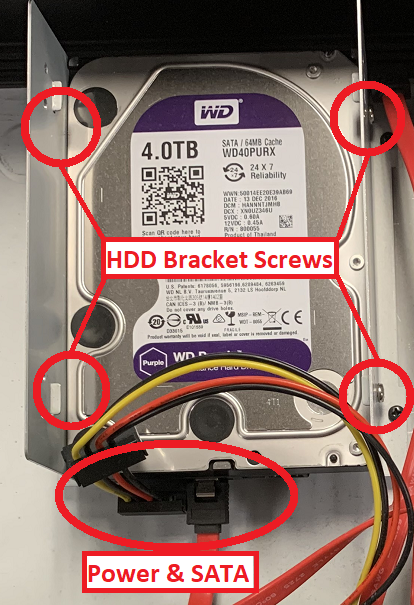 Once the DVR has finished booting, right-click with the mouse and log in as the Administrator.

Click the check box next to your new hard drive, as it appears in the menu, then click the HDD Clear button.

Confirm the message inquiring if you wish to proceed with formatting the hard drive.

The progress bar at the bottom of the menu will show you the status of the format.

**Note:  If your VMAX® A1 32-channel unit has more than one hard drive, it is recommended to format one drive at a time. 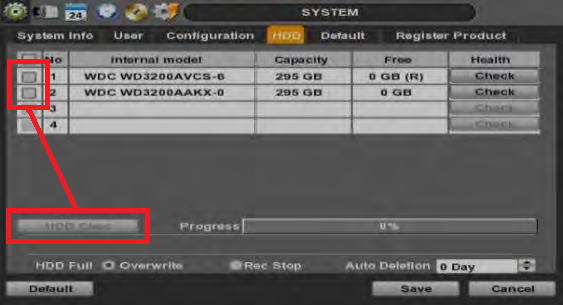 Confirm the message and reboot the DVR.  Once the DVR is done rebooting, you may use your VMAX® A1 normally.

**Note:  If your DVR continues to experience recording issues, please consult with Digital Watchdog Technical Support as there may be additional hardware or software issues occurring with the unit.