The Site-Watch is a powerful sensor for detecting objects and people with high accuracy over long distances, without the need for additional lights, reflectors, or separate transmitters and receivers used by other systems.

Calculating the distance of any object up to 500 meters (1640 ft.) away at 400 Hz, the sensor minimizes the false alarm rate while increasing the successful detection of objects.  To reach the full potential of the system, it is important to know how to create alarm zones and reference points for its intended purpose.

This article will guide you through an example scenario while describing the ideas of virtual fences, alarm zones, reference points, and network alarms.

To meet the increased number of boats and engine thefts, a large, private marina requires an alarm system capable of detecting intruding boats.  The Site-Watch is perfect for this application. 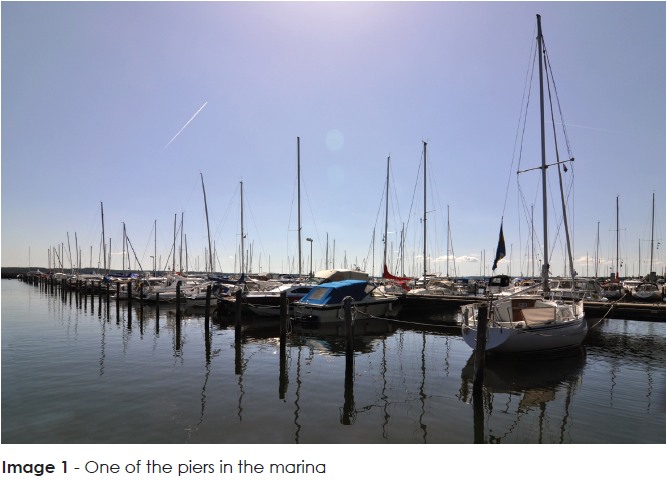 The position of the Site-Watch should be carefully planned to ensure good functionality and maximum efficiency of the sensor.

An aerial photo of the marina (Image 2) shows that the area can be secured with two sensors.  Both Site-Watch sensors can be placed on the outer bridge to reduce the risk of trespassing vandals.  The chosen locations make it possible to create separate alarm zones for each part of the marina and to set up reference points. 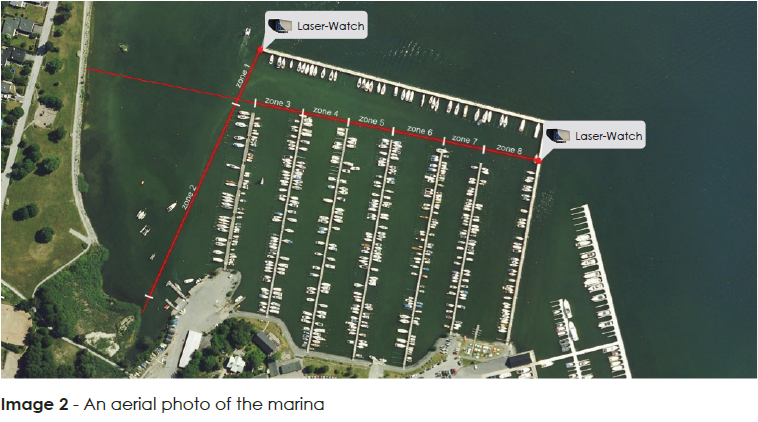 With separate zones for each part of the marina, the surveillance system can be programmed for different actions, depending on the zone where the detection occurs.  For example, Zone 2 and Zone 3 (Image 2) covers a guest harbor, for which the system can be set to always alert the Harbor Master when boats arrive.  Meanwhile, the other zones are only active during night time.

It is virtually impossible to see intruders in the dark, but knowing the exact zone that an intruder is detected in assists security personnel in locating the area more efficiently.  The system can also choose the best camera angles and automatically point a PTZ camera to the location of the object.

Reference points are used to detect tampering.  For example, if someone tries to realign the system or if the weather conditions are poor.

With the units in place, alarm zones are created in the web interface with four parameters – Zone name, Near distance, Far distance, and Alarm sensitivity.  Up to 20 alarm zones and one reference point can be set for each sensor.

The alarm sensitivity field also includes a checkbox to control alarm behavior if multiple objects appear in a zone.  This is referred to as Multiple Alarms and is enabled by default.  This setting allows the unit to trigger new alarms when previously existing objects remain in the zone. 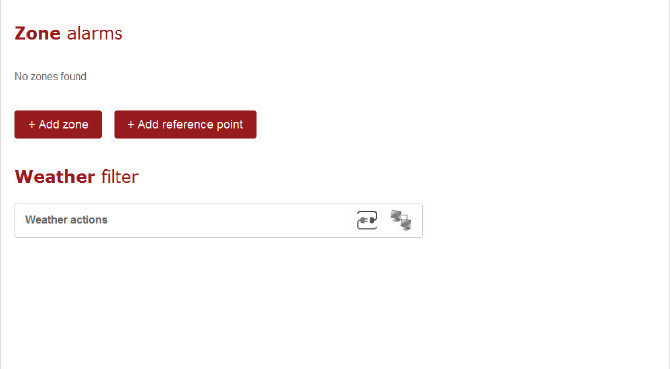 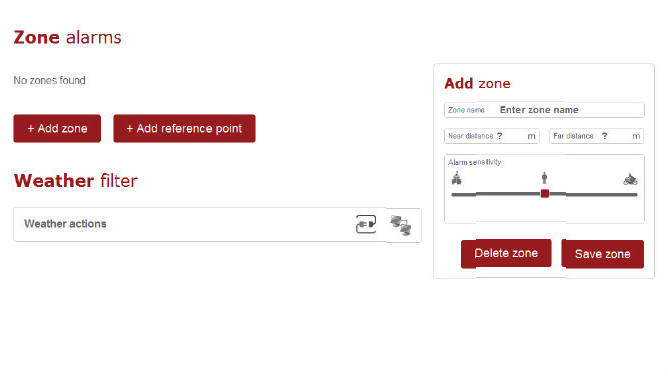 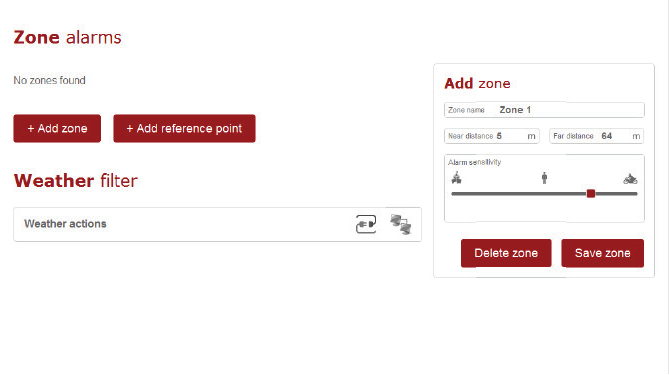 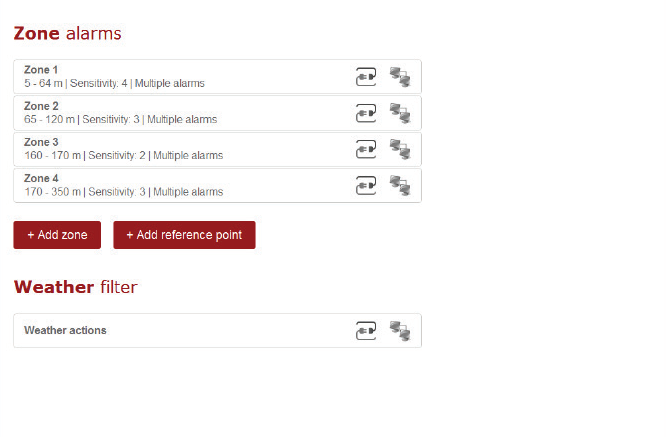 Set the Distance and Alarm sensitivity, then click the Save button to apply the settings. 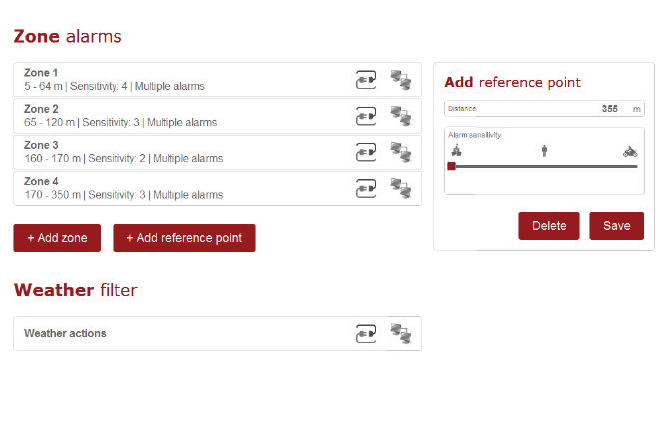 By clicking on the network icon, you can set URL connection alarms.

By clicking on the connector icon, you can set relay actions.

The icon will fill with color while in use.

Select the VMS (Video Management System) from the dropdown list.  Choose other if your system is not listed.

Depending on the VMS system, input parameters may appear differently than displayed in this article. 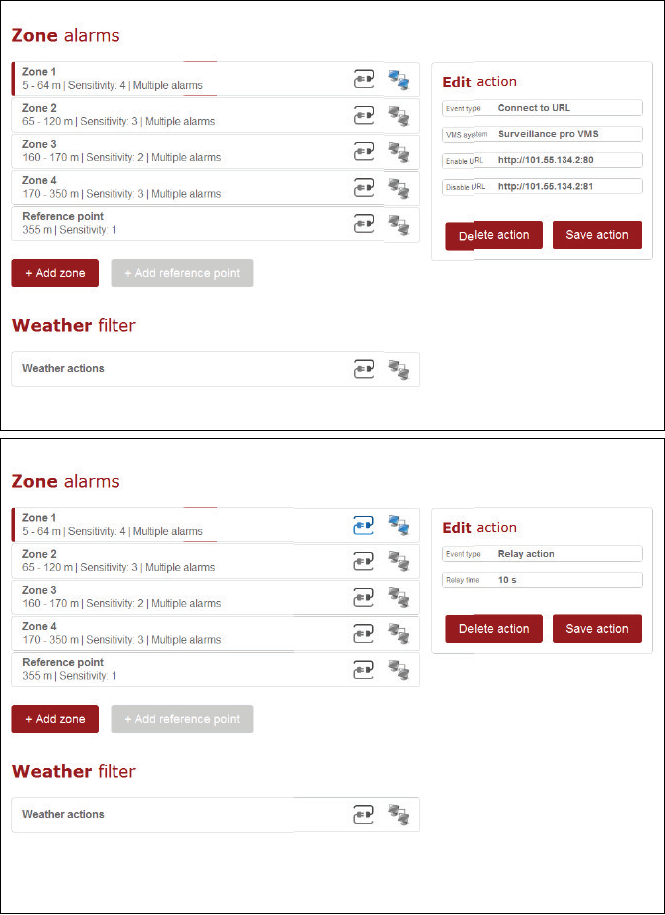